The Courage of Ruby Bridges


To help students connect with the story of Ruby Bridges and explore how her motivation to attend school gave her the courage and tenacity to persevere despite extraordinary obstacles.


Imagine that you are walking toward the school. The streets are lined with protesters, and they are shouting at you, throwing things at you, and telling you to go home. A police officer shows up to help you walk safely into the building. What thoughts and feelings might enter your brain?


Show Normal Rockwell’s famous painting (“The Problem We All Live With”) of her walk to school and ask students what they notice: 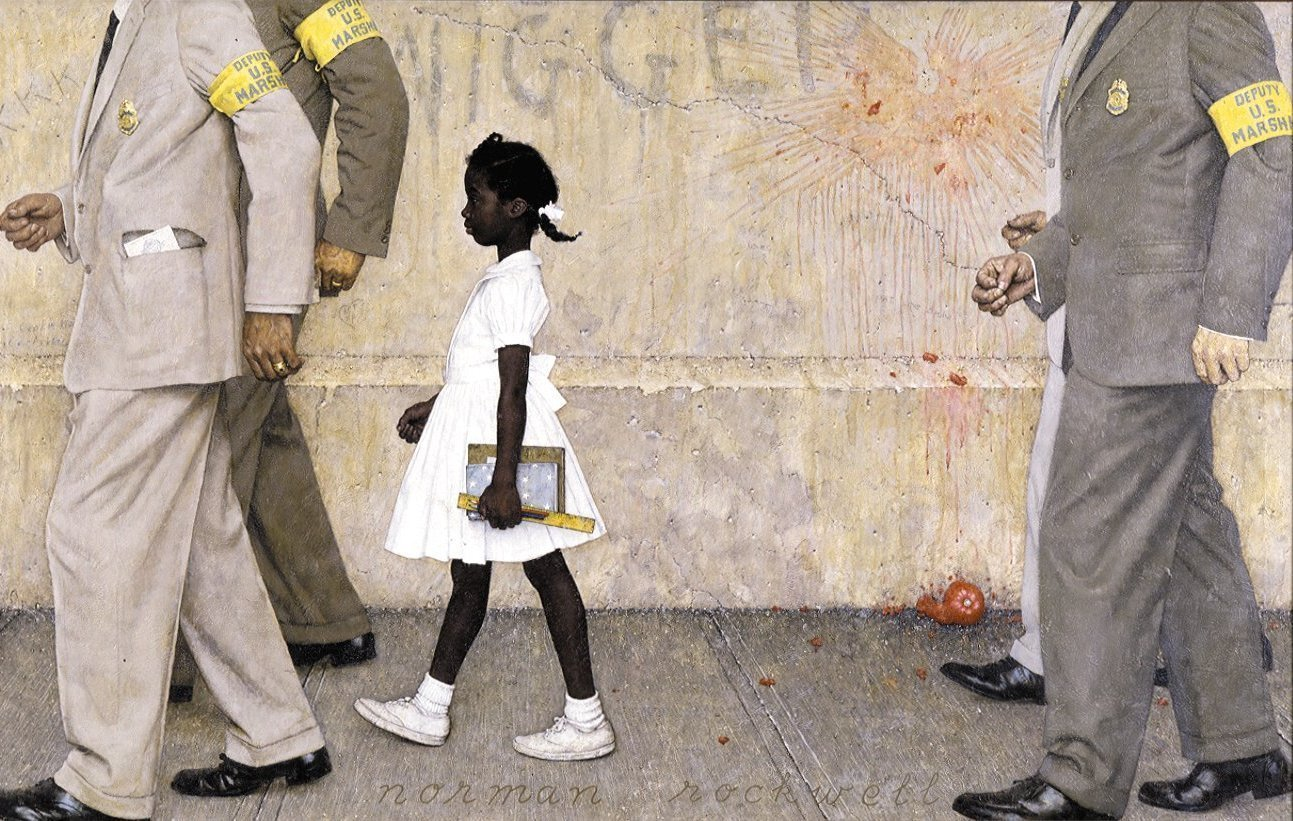 Introduce the story of Ruby Bridges. The year Ruby Bridges was born, the Supreme Court issued a ruling on Brown v. Board of Education of Topeka, calling on schools to desegregate. However, integration did not happen right away. When Ruby Bridges was five years old, she attended a segregated Kindergarten in Louisiana with other African-American students. But the next year, she become the first black child to enroll in the all-white William Frantz Elementary School. When she arrived on the first day, there were crowds of people lining the streets to protest her enrollment in the school. They held up signs and yelled insults. But she did not turn around and head back home.  She kept returning to school day after day. Every teacher in the school refused to teach her except for one — so she was in a class by herself the first year with Mrs. Barbara Henry, who became a good friend. At first, all the parents of white children kept their kids home, but slowly they started to return to school. In the years that followed, the elementary school slowly became an integrated environment.


Ask students to respond first in writing and then aloud to the following questions: As a six-year-old, Ruby Bridges faced an incredibly stressful, challenging situation.  Put yourself in her shoes for a moment. Why do you think she continued to go to school? What may have motivated her? What strengths did she show at this young age — what does this story reveal about her character?


Break the students into groups and give them each one of the following quotes.  What else do you learn about this even and about Ruby Bridges’ character from studying these quotes?


Quote #1: When Ruby made it through the crowds got her her classroom, her teacher said to her, “I saw your lips moving, but I couldn’t make out what you were saying to those people.” “I wasn’t talking to them,” Ruby responded. “I was praying for them.”


Quote #2: Years later, Ruby Bridges shared this advice, “Don't follow the path. Go where there is no path and begin the trail. When you start a new trail equipped with courage, strength and conviction, the only thing that can stop you is you!”


Quote #3: "I now know that experience comes to us for a purpose, and if we follow the guidance of the spirit within us, we will probably find that the purpose is a good one."


Quote #4: “Every day, I would show up, and there were no kids, just me and my teacher in my classroom. Every day, I would be escorted by marshals past a mob of people protesting and boycotting the school. This went on for a whole year.”


Quote: #5: “If you really think about it, if we begin to teach history exactly the way that it happened – good, bad, ugly, no matter what – I believe that we’re going to find that we are closer, more connected than we are apart.”


Quote #6: “Now that I’m a parent, I know that my parents were incredibly brave.”


Quote #7: “The greatest lesson I learned that year in Mrs. Henry’s class was the lesson Dr. Martin Luther King, Jr., tried to teach us all: Never judge people by the color of their skin.”


Quote #8: “The people I passed every morning as I walked up the school’s steps were full of hate. They were white, but so was my teacher, who couldn’t have been more different from them. She was one of the most loving people I had ever known.”


Quote #9: “What I do remember about first grade and that year was that it was very lonely. I didn’t have any friends, and I wasn’t allowed to go to the cafeteria or play on the playground. What bothered me most was the loneliness in school every day.”


Quote #10: “We’d get these boxes of clothing in the mail, and my mom would say, ‘What makes you think all this is for you? You’ve got a sister right behind you.’ So then I realized, we’re all in this together. We have to help each other.”


Ask students to quietly write about the following question: “You may not have to walk past angry crowds to get to school, but what is one way you have shown courage this year?”

The Stress Tests of Character curriculum was made possible with the generous support of a grant from the Kern Family Foundation and our partnership with the Jubilee Centre for Character and Virtues.


For more information on this and other resources, visit The LifeCompass Institute.